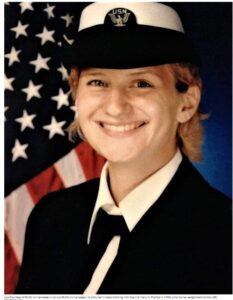 A young Buffy Lin Levasseur had finished her high school education in 1986 while employed as a sitter for a military family at Fort Carson, Colorado. Inspired by a number of relatives who had served in various branches of the military in World War II and Vietnam, she chose to pursue an interest in joining the U.S. Marine Corps but failed to achieve one of their initial enlistment requirements.

“I was very thin and could not meet the minimum weight requirements,” she chuckled in reflection. “No matter what I tried to do or eat, I couldn’t gain the weight and the Marines would not give me an enlistment waiver.”

She soon found favor with the U.S. Navy and was granted a waiver for her weight. In 1988, following her enlistment, she traveled to the Orlando Naval Training Center, which became the sole basic training site for enlisted women in 1973. (The installation was closed in the mid-1990s as a result of the Base Realignment and Closure Commission.)

“I had signed up to become one of the Seabees (Navy construction battalions), but I was injured during boot camp and lost my slot for the school while I was recovering,” she said. “I finally finished boot camp after being there for 13 weeks, attended Fireman Apprenticeship Training and was stationed on the USS Yosemite (AD-19) at Mayport, Florida, as an ‘undesignated’ fireman sailor.”

Shortly after reporting to her initial duty assignment aboard the destroyer tender, Levasseur discovered they would soon be getting underway.

To read the rest of the story, click on Buffy Lin Levasseur on the USS Yosemite

This site uses Akismet to reduce spam. Learn how your comment data is processed.

END_OF_DOCUMENT_TOKEN_TO_BE_REPLACED

Just a quick reminder -- our 2023 Reunion will be in Jacksonville, Florida, at the Embassy Suites Hotel at 9300 Baymeadows Road. The 2023 Reunion is …